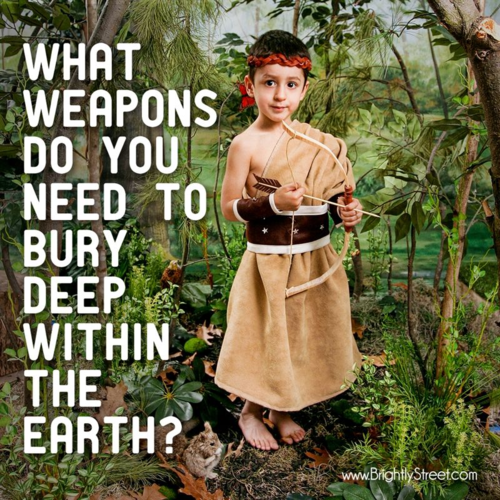 There is a story found in the Book of Mormon that speaks of murder, sin, death, redemption, change, repentance, courage and forgiveness.  It is a story of a people that delighted in murdering and all kinds of sin before they had a mighty change of heart and were taught about Christ and his atoning sacrifice for them if they would repent and change.  It is fascinating that the preaching of God’s word was done by an one of the enemies of these people.  His name was Ammon.  Because of Ammon’s great example and service to the king of his people’s enemy, they were able to be converted to Christ and they no longer delighted in bloodshed, but wanted to follow the commandments of God.

Since these people gained a testimony of Jesus Christ they wanted to show God that they would no longer go to war against anyone.  They decided to bury their weapons of war deep in the ground.  Their change was so complete and their desire to turn away from their wicked ways inspired them to be courageous.  The scriptures say, “They were firm, and would suffer even unto death rather than commit sin.”

Not long after the people gave up their weapons, they were attacked by another group of people that came to destroy them.  What would you do in a situation like this?  Here you are, you just heard about Christ, decided to keep his commandments so you make an oath that you will not raise a weapon ever again.  An army is at your door ready to kill you and all of those you love.  Would you be tempted to fight to protect those you love?  This is what the people did when faced with sudden death.

“Now when the people saw that they were coming against them they went out to meet them, and prostrated themselves before them to the earth, and began to call on the name of the Lord; and thus they were in this attitude when the Lamanites began to fall upon them, and began to slay them with the sword.”

I can’t imagine that type of bravery.  I hope I would have knelt down beside them if I lived in that time. Yet I don’t know if my faith in God would be great enough, especially in light of my children and loved ones, that I would feel like I needed to protect; yet their love for the Lord was put first.

As I began to ponder this story and what those weapons of war that were buried deep in the earth, I started to reflect on my own life and choices.  Was I choosing the better part?  Am I following the Savior and right on his heels doing what he would have me doing or was I a few steps back just trying to keep up?

I felt inspired to make some changes in my own life to help myself become like these great saints of God.  What a blessing it is to have the redeeming love of Jesus Christ in our lives and for the opportunity it gives us to change everyday and become more like Him.

What weapons do you need to bury deep within the earth?  They may not be earth shattering changes, but where can we find areas in our own lives to change that will lead us closer to the footsteps of our Savior? Here is a fantastic talk about how we can come unto Christ and how Ammon’s people were able to bury their weapons deep.