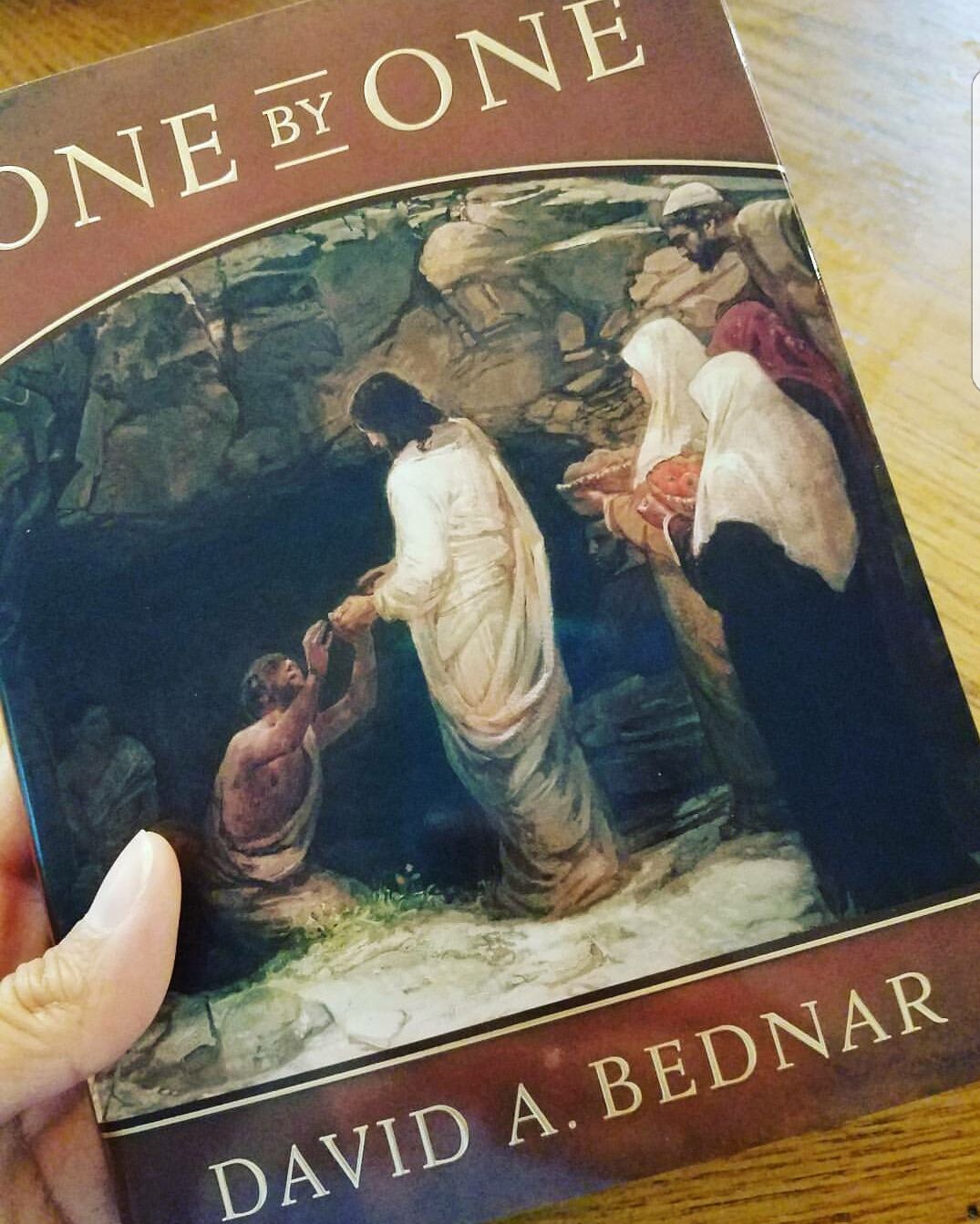 Ministering in the Lord’s way was taught by Jesus Christ’s perfect example to the one.  Although throngs of people followed him, he still focused on each and every one of his children as unique individuals.  Elder Bednar wrote a book titled “One by One” that explains how the Savior ministered to the people and how we can follow in Christ’s example.

In Chapter 4, Elder Bednar talks about a yoke that is used to keep oxen walking together.  The yoke example is often shared when speaking about marriages and how they need to be “evenly yoked.”  When teaching about a yoke, Elder Bednar says “Making and keeping sacred covenants yokes us to and with the Lord Jesus Christ.  In essence, the Savior is beckoning us to rely upon and pull together with Him, even though our best efforts are not equal to and cannot be compared with His.  As we trust in and pull our load with Him during the journey of mortality, truly His yoke is easy, and His burden is light.”

In order for us to go to the rescue and bless the lives of our family, church and community, we need to first yoke ourselves to Christ.  We fill our glasses up so that our light can be shared with others as was taught by Sister Marriott during Women’s Conference.  As we fill our cups, we are better prepared to minister to the one and be the Lord’s hands here on earth.

There is a great part in the book of ministering in the church one by one.  He mentioned how sometimes we get bogged down with the administering part of church callings that we loose our focus of ministering to individuals and families.  Elder Bednar mentioned that when we are counseling together there should be a “revelatory experiences intended to bless and strengthen people.”

In another great quote he said, “the Church of Jesus Christ of Latter-day Saints is a workshop in which we gain experience as we practice on each other in the ongoing process of perfecting the Saints.”

This summer my eyes were opened to ministering one by one in a unique way.  I set a goal years ago to wake up early.  Read more about how I was able to do that in a past post called “Four Ideas to Help Bring Happiness in Motherhood.  This summer though, I made a choice to throw that idea out the window and I was determined to sleep in everyday during summer break.  I deserve a break too right?  Well, I wasn’t getting in my good uninterrupted hour studying of the scriptures time since I was rolling out of bed when the kids were already up.

Once school went back into session, I got back into my morning routine.  I immediately felt like I had wasted my entire summer break by cutting out this important habit of arising early.  Now, that it is back in place, personal revelation again has been flowing.  I often have a thought come to me that I should share what I was just impressed by the spirit with someone else.  I will sometimes share it on social media or send an individual text message to a friend that came to my mind.

One morning when I was having an especially hard time getting out of my bed at 5:20am, I heard a voice in my head say “who will you miss today, if you stay asleep?”  That thought pierced my heart and I jumped out of bed ready to dive into the scriptures.

I think this is one way I can minister one by one.  Whatever we do, let’s do something to remember that “the worth of souls is great in the sight of God.”

I recently wrote an article about Puerto Rico and Hurricane Maria that has caused great destruction so much so that the missionaries currently serving in Puerto Rico are being reassigned temporarily to other areas of the United States.  There is a San Juan Puerto Rico Facebook group that I am apart of.  Since the hurricane, the group has been taken over by concerned parents and friends of the missionaries and rightly so!  They have been commenting about their concerns for their children and the Puerto Rican people.

As I finished this book, this part where Elder Bednar talks about mission calls just jumped off the page.

“Each mission call and assignment or later reassignment is the result of revelation through the Lord’s servants. A call to the work comes from God through the President of the Church. As assignment to one of the more than 400 missions presently operating around the world comes from God through a member of the Quorum of the Twelve Apostles… The spiritual pattern of one by one is used by the Brethren as assignments or reassignments are made. Each prospective missionary is considered and assigned individually..”

He then spoke about how missionaries are not called to a place like Puerto Rico or any other mission, he said they are called to serve. He goes on to say, “because the work of preaching the gospel is the Lord’s work, He inspires, guides, and directs… Perhaps one of the lessons the Savior is teaching us… is that an assignment to labor in a specific place is essential and important but secondary to the call to serve.”

I felt impressed to share that quote on the facebook group to maybe give some understand and peace regarding the temporary mission assignment. Many missionary parents did not find out until it was posted on news channels.

I have already seen some parents comment and fill grateful for this quote from Elder Bednar.  This to me is another sign of what he talks about in this book when he mentions “I believe that in the work of the Lord there is no such thing as coincidence.”

I think I was sick in bed today and missing church so I could finish this book and share Elder Bednar’s words with the mission parents of Puerto Rico as their children fly to other missions around the US on reassignment as they continue to be called to serve.

Let’s work together like busy elves for the Lord, building each other up, delivering words of kindness and ministering in the Lord’s way “one by one.”

As President Kimball said, “God does notice us, and he watches over us.  But it is usually through another person that he meets our needs.  Therefore, it is vital that we serve each other.” Grab this cute printable above from Free Time Frolics.

Tags: Elder Bednar, Nathan Pacheco, One by One, Paul Cardall